While the outbreaks in New York and Florida have reached similar numbers, they represent distinct periods in terms of capacity to test and manage COVID-19 in the US.

On April 15, at the height of this spring’s outbreak in the Northeast, New York reported that 11,571 people had tested positive for COVID-19, the state’s all-time high. On July 12, Florida reported 15,300 new confirmed cases of COVID-19, surpassing New York’s single-day record and reaching its own one-day high. On July 29, Florida hit 451,423 cumulative cases (21,194 cases per million), crossing New York’s per capita case count of 21,164 per million on that day. Despite the numbers, though, the shape and relative severity of the two outbreaks are quite different—and their differences can illuminate some of the progress that the United States has (and hasn’t) made in its response to the pandemic.

Back in April, when New York became one of the global epicenters of the COVID-19 pandemic, the state’s testing volume was minuscule. As daily new cases rose in late March, New York tested fewer than 20,000 people each day. By mid April, testing capacity remained under 30,000 people per day, and criteria for being given a test remained severely restricted.

As a result, New York’s percent-positive rate at the height of its outbreak was distressingly high—about 43 percent on April 15, when new cases peaked—suggesting that there were likely far more cases of COVID-19 in the state than the sharply limited testing could capture.Subsequent serology (antibody) test results analyzed by the Centers for Disease Control and Prevention suggests that infections in New York City, the state’s epicenter, were twelve times higher than the official case count showed in April.

With per-capita cases numbers higher than New York’s, Florida’s outbreak has also reached global epicenter status, but its testing situation is very different. By mid-July, Florida was averaging nearly 60,000 COVID-19 tests per day, double the number available in New York during that outbreak’s peak. Florida’s all-time high of 15,300 new cases on July 12 accounted for 15.5 percent of that day’s reported tests, suggesting that far more infections were being captured by testing.

The percent positive rate we can estimate from Florida’s incomplete public data indicates that the Southern state is likely capturing far more of its positive cases than New York did. Still, Florida has significant testing gaps that prevent us from assembling a complete picture of the outbreak. Although testing in Florida has increased more than 540% from May 1 to June 17, when the state reached a record seven-day average of more than 65,000 daily tests, labs are having a difficult time keeping up with demand.

In recent weeks, long lines and a national testing capacity crunch have meant that some Floridians are waiting of up to two weeks to receive their test results. This makes testing nearly useless for measuring outbreak severity or preventing spread, because the wait time for a test result can be the same as—or longer than—the incubation period itself. By the time an individual finds out they’ve tested positive, they may be well into or even past the period when they’re most likely to transmit the virus to others. This can be especially dangerous in asymptomatic or presymptomatic cases, where individuals may not isolate without receiving a positive test result. A two-week result delay also gives state officials a snapshot of new infections weeks in the past, rendering them all but useless for disease surveillance purposes.

The return of testing problems hasn’t been limited to Florida. As outbreaks smolder across the South and West, testing labs are approaching their maximum capacity for processing tests. Testing sites across the Sun Belt are seeing extremely long lines and issues related to rising temperatures — some had to be temporarily or permanently closed because of extreme heat. Amidst the surge in cases across the country, labs are now reporting delays in test results which are affecting New Yorkers too. This indicates that we might see new delays that could further mask the full extent of rising outbreaks throughout the country.

At the national level and within states with major outbreaks—Florida included—death counts are still rising, but remain well below the national early-May peak. Florida’s daily reported deaths have so far not risen much above a quarter of what New York reported in the most deadly weeks of its outbreak.

So why, despite soaring case counts, has Florida seen a fraction of the COVID-19 deaths that New York experienced? This also goes back to the question of testing capacity. Because Florida is testing so many more people than New York did, and with less restrictive testing criteria, the state is likely capturing more mild and asymptomatic cases, the vast majority of which will not be fatal. This means that even as case numbers surpass New York’s, hospitalizations and deaths will likely remain much lower.

The approximately three-week lag between symptom onset and the reporting of a death does mean that even as the rate of new cases begins to decline, we should expect deaths to continue to rise for at least two to three weeks.

Florida’s daily reported deaths have increased in recent days, hitting a new high of 257 new resident deaths on July 3129, suggesting the surge in cases has begun to influence the state’s death count. To better understand an outbreak’s severity—and thus how many people may ultimately die of COVID19—we usually look at data on current COVID-19 hospitalizations. Usually, after hospitalizations increase, deaths tend to follow the same trend two to three weeks later.

Even with these caveats, though Florida’s hospitalization numbers are about half of what New York saw during the height of its outbreak, which gives us hope that the state’s death figures will remain much lower than those that emerged at the height of New York’s spring outbreak.

Besides testing capacity and the timeline of the coronavirus in the US, the biggest differences between the outbreaks in Florida and New York lie in the distribution of the states’ populations and the way their local authorities dealt with the virus.

Genetic and serology studies now suggest that COVID-19 was spreading among New York City’s more than 8 million people as early as February of this year, when the US response to the virus was largely subdued. Even as case counts began to rise sharply in New York, scientists and public health experts were still learning about the effectiveness and necessity of containment measures in real time. New York saw daily increases in COVID-19 cases for two weeks before CDC’s early April recommendation that members of the public wear cloth masks. In Florida, by contrast, daily new cases didn’t spike until the middle of June, when transmission mechanisms were better understood.

Government responses to the virus in the two states have also differed significantly. While New York’s Gov. Andrew Cuomo imposed strict measures—considered draconian by many—effective March 22, Florida’s Gov. Ron DeSantis refused to do so. The sunshine state issued a limited stay-at-home order on April 1—one of the last states in the country to do so—and never closed all of its beaches. Florida has not imposed a statewide mask mandate, though about a third of its counties have done so locally. In contrast, New York started requiring face coverings on April 15, the same day it reached its peak number of new cases.

Not only was Florida one of the last US states to issue a stay at home order, it was also one of the first to reopen. The World Health Organization has recommended that test positivity rates reach 5% or lower for at least 14 days before reopening. Florida, which began reopening businesses on May 4, has not met this metric. And while the state has reversed some reopening measures by closing bars, many venues, including restaurants, museums, and theme parks, remain open.

By imposing strict measures and reopening in limited phases, New York has managed to control the spread of the virus, flattening its case curve. The same is not yet true in Florida, which is still reporting a seven-day average of more than 10,000 cases daily, leading the United States for new cases per capita. In recent days, Florida’s case counts have begun to drop—but they’ve done so in near-perfect alignment with a reduction in testing.

On Thursday, July 30, all of Florida’s state-run COVID-19 testing sites and many county sites closed down in preparation for the arrival of Tropical Storm Isaias. The testing sites will not reopen until at least Tuesday, August 1, and some will be closed longer. With this extended closure following on an already established trend of declining tests, we can expect to see Florida’s case counts continue to drop—and to do so whether or not new infections are rising or falling.

Note: In New York, the state reports approximately 5,700 fewer deaths than are reported by New York City. We use the state-reported figures, which means our New York numbers reflect a lower total than trackers that include the NYC reports the state omits. In Florida, our figures for daily new tests and total tests are slightly lower than those provided by the state (0.22% lower for new tests and 0.14% lower for total tests) for reasons related to our historical use of the state’s data sources.

Júlia Ledur is a visual journalist and illustrator who leads the visualization team at The COVID Tracking Project. She is a former graphics reporter at Reuters. 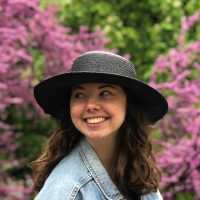 Emma Rubin is a recent college graduate and freelance journalist.