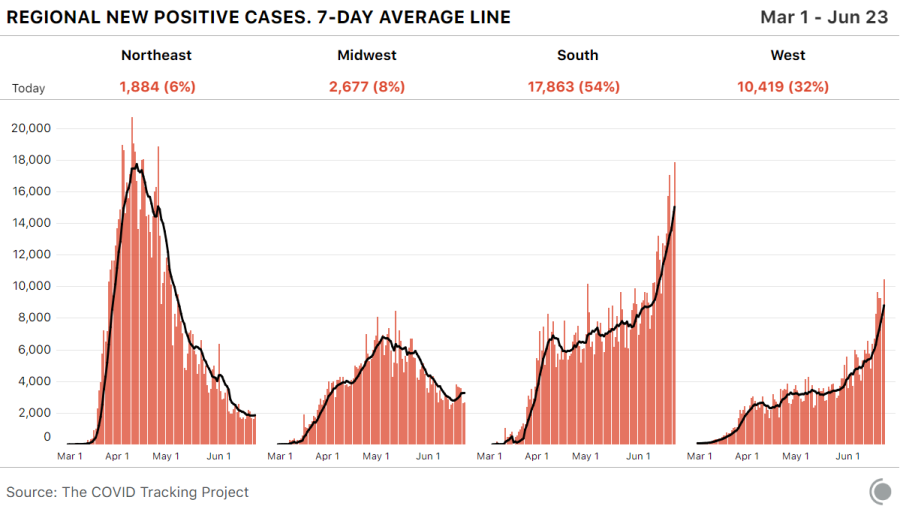 Outside of the original epicenter in the Northeast, COVID-19 cases are rising across the United States. In fourteen states, the number of new cases discovered each day has increased in the last two weeks, some quite sharply: in Georgia, cases are up 27 percent; in California 37 percent; in Florida, 55 percent; in Texas, 56 percent. In Arizona, cases have risen from 28,296 to 58,179, an increase of more than 105 percent.

Florida posted how many people were hospitalized with COVID-19 on a given day for only a few days before taking this data offline.

But we also know that the United States has substantially expanded COVID-19 testing. Testing numbers we compile from states and territories are up 30 percent in the last two weeks alone, and the seven-day average for daily tests is finally over the 500k/day initial acceptable minimum from the Harvard Global Health Institute (which has now been increased to 900k/day).

Two charts that can help us understand the case count jumps

So how can we tell whether the increase in cases is an accurate indication of worsening outbreaks or an artifact of expanded testing? Rising COVID-19 hospitalizations are suggestive of worsening outbreaks, but if a state is doing enough tests to discover mild or pre-symptomatic cases, hospitalizations may lag behind positive tests by days or weeks.

There’s a simple way to get closer to a definitive answer about which case count numbers indicate new or worsening hotpots. The percent-positive rate shows us how many tests come back positive, out of all tests performed. This rate can help us interpret case count increases:

Another way to look at the relationship between case counts and test counts is to compare the rate of change for a state's case-count rise to the rate of change for its testing numbers. If we chart the week-over-week increase in cases and tests from the last two weeks, we can see more clearly that for a few states, increased testing really does seem to account for some or all of the increase in new cases. The same comparison also makes it clear that in the states with the worst case numbers, testing explains only a fraction of the rise in cases.

Testing is booming in Arizona, but even this major testing increase hasn’t caught up to the rise in new cases. Week over week, Texas has also posted a big gain in testing—but again, this growth has been outstripped by the increase in new cases. California, on the other hand, has increased testing by the same proportion as Texas, but has seen a much smaller increase in new cases—testing probably accounts for more of California’s rise in cases than Texas’s.

The starkest example, Florida, has actually slowed testing almost 10 percent, week over week, while seeing a 65 percent jump in the cases in the same time span. Florida’s rising cases, we can conclude, have nothing to do with expanded testing. South Carolina and Kentucky have followed the same pattern as Florida, with testing increases slowing while cases rise.

Given the high percent-positive rates and the degree to which case counts have outpaced tests in Arizona, Florida, and Texas, we interpret the case counts as indicators of sharply worsening outbreaks. In California and Georgia, where percent-positive rates remain relatively steady, the numbers are more difficult to interpret, but we’ll be watching them closely over the coming weeks.

Want the weekly insights from our data by email? Join our low-frequency email list.

Charts by Peter Walker of The COVID Tracking Project and COVIDCharts.tech.

Erin Kissane is managing editor of the COVID Tracking Project. 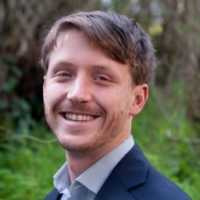 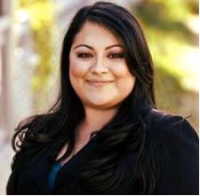